Celebrating one of the finest talents in comics, The Tom Paterson Collection is a gorgeous hardcover bringing together strips from Tom Paterson, artist on titles such as Buster, Whizzer and Chips, and many more.

Continuing our series of short essays commissioned from selected comics critics that explore 2000 AD and the Treasury of British Comics’ latest graphic novel collections, Doris V. Sutherland takes a look at the mad, mad worlds of one of Britain's best cartoonists... 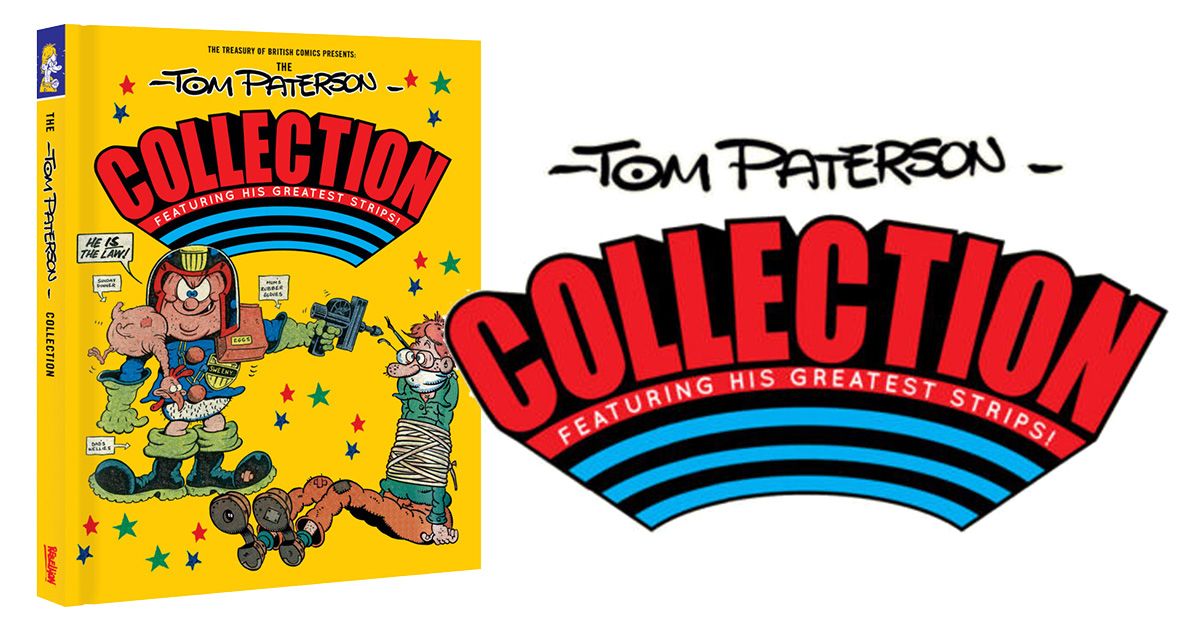 Generations of children (and not a few adults) have loved the comic strips of Tom Paterson. His bizarre characters and their exploits always did stand out in British comics; and with the range of styles he mastered, many will doubtless be surprised that all of these strips were drawn by one man. Now, with The Tom Paterson Collection, a selection of his best work has at long last been reissued.

Inside, readers will find the likes of Jake's Seven, an early-eighties Jackpot strip about schoolkids travelling to the future and meeting a Dick Dastardly-esque villain. From 1987 comes Kipper's 'Felix the Pussycat', a superhero spoof about a boy who fights crime dressed as a cat -- not a cat-themed superhero, just a cat. Come the nineties. Paterson was drawing 'Lucy Lastic' for Buster: a girl whose lengthy, rubbery limbs prove both blessing and curse.

One of the book's biggest draws is Paterson's 1984-7 work on 'Sweeny Toddler' in Whoopee and Whizzer and Chips. Here, we see one of Paterson's most readily-evident gifts: his uncanny ability to emulate Sweeny’s creator, Leo Baxendale. Many cartoonists may be able to cobble together an outward imitation of Baxendale's style, but to produce anything more than just a soulless copy would require the artist to share Baxendale's oddball sense of visual humour. The bulk of Paterson’s 'Sweeny' strips are practically indistinguishable from Baxendale's own work. 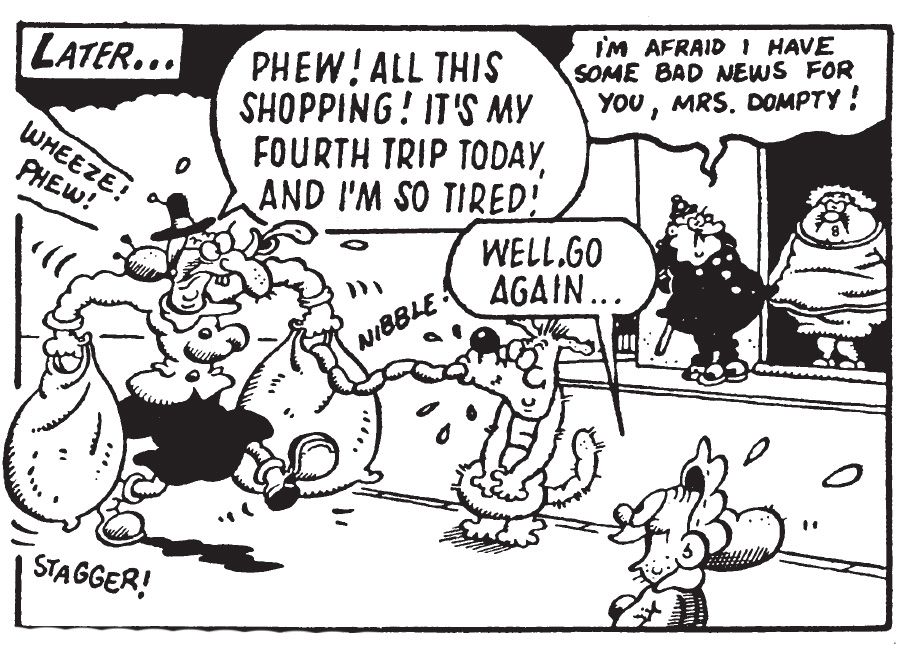 If there is a significant difference between the Baxendale and Paterson 'Sweeny Toddler', it would be the additional layer of rubbery grotesqueness that occasionally appears on Paterson's work. The strip where Sweeny takes part in a face-pulling contest with Frankenstein, for example, recalls more the inspired cartoon ugliness of Ken Reid. 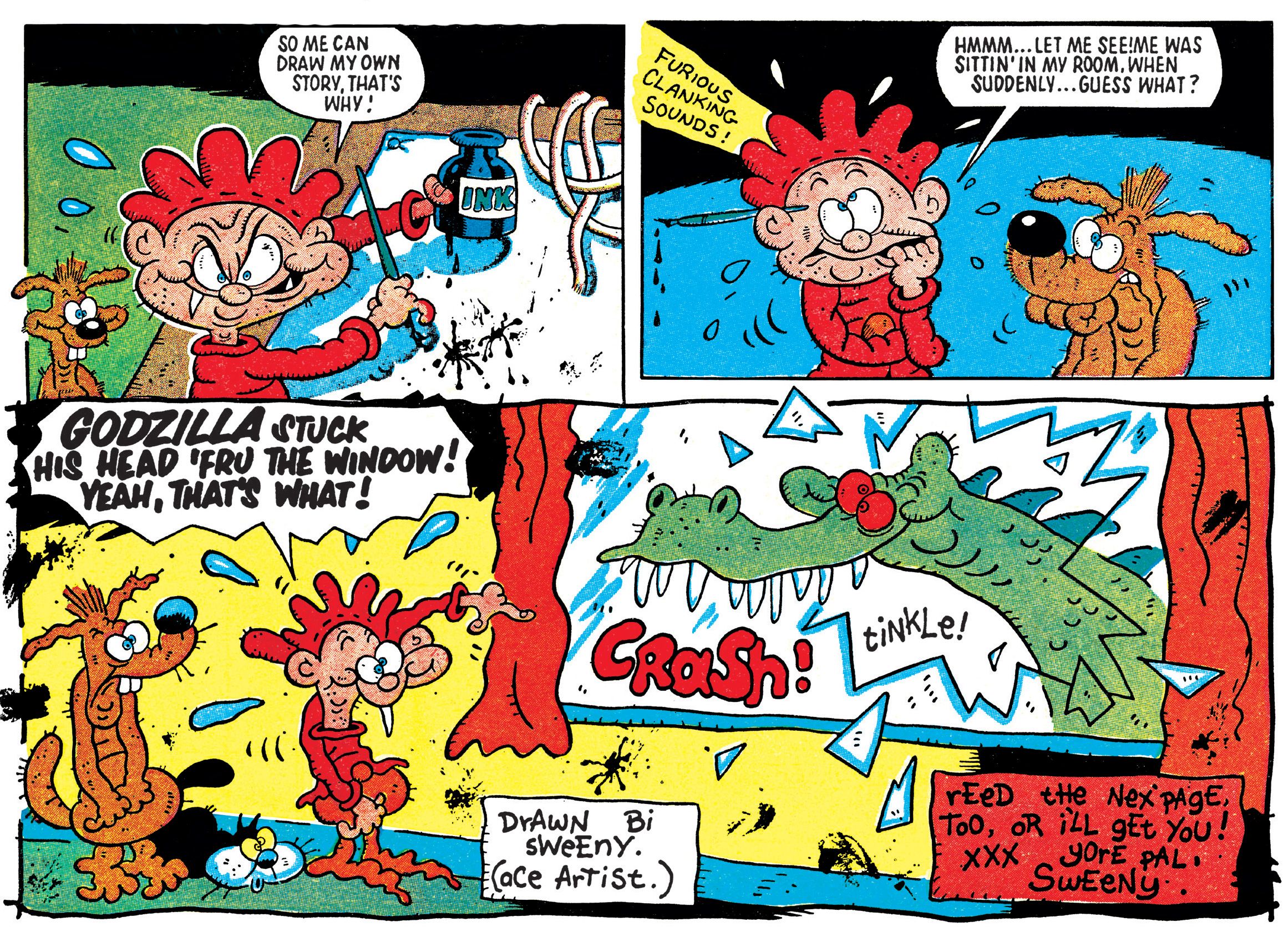 Paterson perfects this half-Baxendale, half-Reid style with 'Fiends and Neighbours' (from the 1976 Cor!! Annual) and its spiritual successor, the early-eighties Whizzer and Chips strip 'Strange Hill'. These feature lovable grotesques who range from harmless cartoon spooks to genuine oddities. The latter are put on display when the Strange Hill teacher takes his class on a trip to Stonehenge, and encounters a band of hooded, faceless figures: "Nyaargh! Ghostly druids!!"

In Paterson’s world even pretty girls can be pretty odd-looking. Witness the 'School Belle', who debuted in 1983 and migrated from School Fun to Buster. Far from being generically attractive (like the Dolly Parton parody who turned up in Jackpot's The Park, drawn by Paterson two years earlier) she is a comically lumpy, lanky portrait of adolescence.

Another clear influence on Paterson is Robert Crumb. This shows up in some of Paterson's later work, particularly Whizzer and Chips' rap-themed 'Watford Gapp' from the late eighties and Buster's cool-dude superhero Captain Crucial from the nineties. The rubbery line-shading, Mr. Natural pickle-noses, borderline psychedelic starscapes and exaggerated-perspective "keep on truckin'" gaits found throughout these strips all speak of Crumb.

The Crumb-influenced strips also show a distinct touch of Reid. 'Sportsfright', 'Thingummy-Blob', 'Coronation Stream', 'Teenage Mutant Turnips', 'Goon Moon' and 'Cosmo Zocket and his Insterstellar Rocket' - all Buster strips from 1990 - depict worlds of monsters, aliens and strange animals that exist on a slider-scale with Crumb at one end and Reid at the other. The Buster of 1990 was clearly fertile ground for Peterson, as he also drew the bizarre 'Monty's Mutant' and 'Stupid Street'. 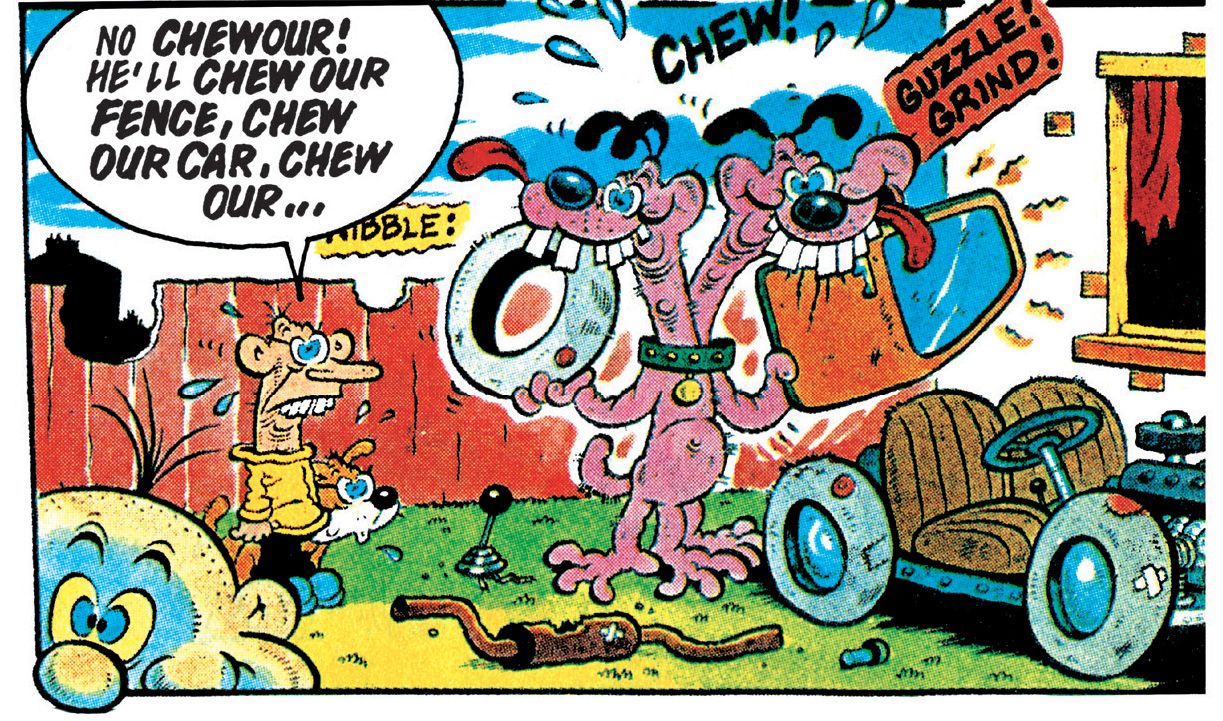 The book contains a selection of Paterson's earlier work from the seventies, including such forgotten strips as Buster's 'Crowjak' (a bald-headed corvid sleuth), Cor's 'Dial "T" for Twitt!' (about an uncle-and-nephew team of detectives) and Jackpot's 'Scooper' (about a father-and-son team of reporters). These afford a clear look at how he developed as a cartoonist.

Consider 'Full o’ Beans', a 1979-debuting Jackpot strip about a boy who develops super-strength after eating a tin of beans, Popeye-fashion. Although generic in both premise and character design are generic, the strip allowed Paterson some grotesque fun, as when a baby eats the beans and grows into a bloated hulk. Compare this to 'Guy Gorilla', a Whizzer & Chips strip from 1983 about a scruffy-headed boy who becomes a huge, jelly-jowled ape after eating peanuts: the idea is essentially the same, but there is far more visual fun.

Another example of Paterson's development is his work on Shiver & Shake's 'Grimly Feendish' - like 'Sweeny Toddler', a character inherited from Leo Baxendale. Early strips from 1973 show a bulgy-eyed Grimly distinct from Baxendale's version: the spirit is similar, but the technique is very different. Come 1974, however, Paterson has mastered the faux-Baxendale style that so many know and love. 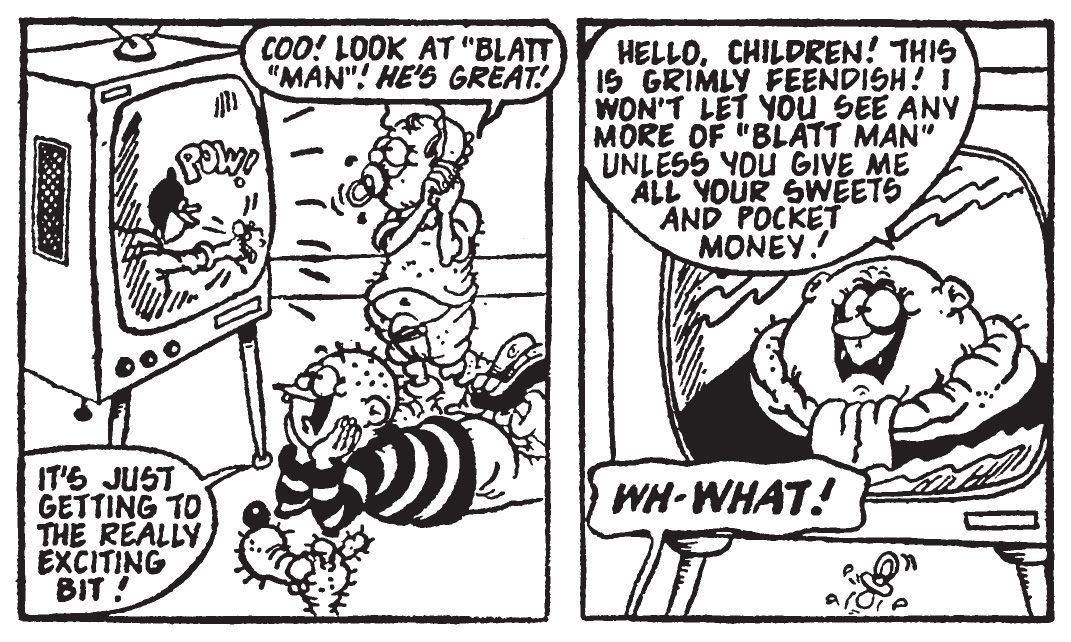 The book shows how Paterson juggled multiple aesthetics at the same time. Even after establishing his madcap style, he was still drawing relatively sedate fare typified by the unrequited-love comedy of 'Horace and Doris', debuting in Whizzer & Chips in 1978; or the boy-and-his-android-double strip 'Robert's Robot', running in the same comic five years later. Tamest of all is the football-themed 'Team Mates' from the short-lived Wow! 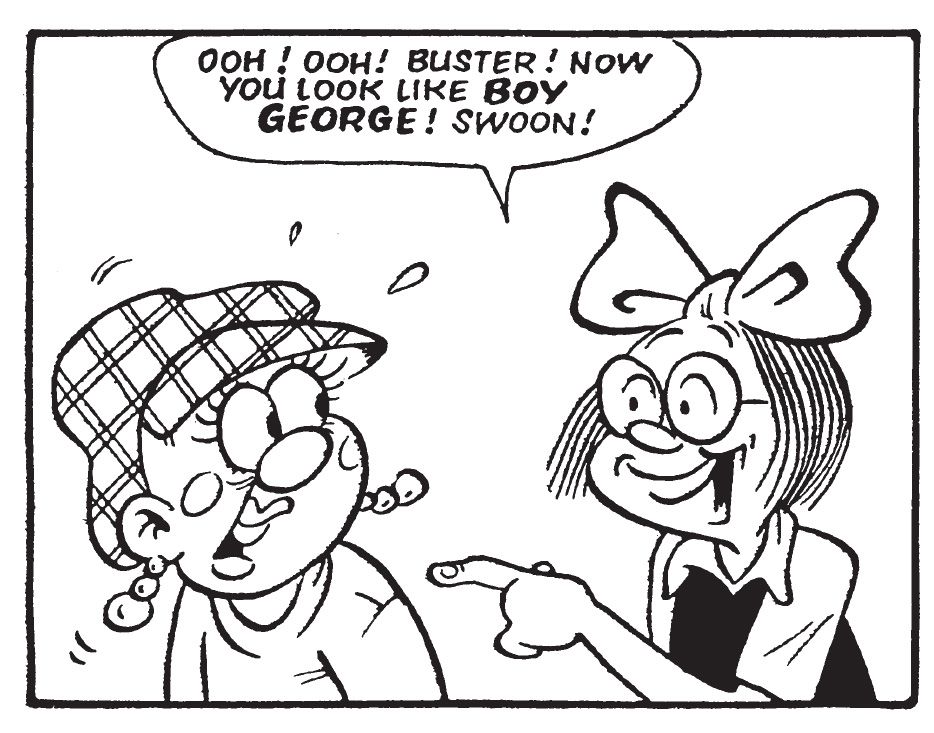 The book opens with Paterson's work on the title character of Buster, drawn between 1985 and 1989. Introduced back in 1960, Buster is a rather generic character (his main selling point being that he wears the same hat as Andy Capp) but Paterson does much to enliven the stories, cramming scenes with sight gags. The Baxendale influence is still evident; but this is the earlier, more elaborate Baxendale of the 'Bash Street Kids'.

A few odds and ends sit alongside the longer-running strips, including some one-off Oink! tales from 1986. Rounding off the volume is six pages of Blerp, an unpublished comic about various  Crumb-esque aliens. 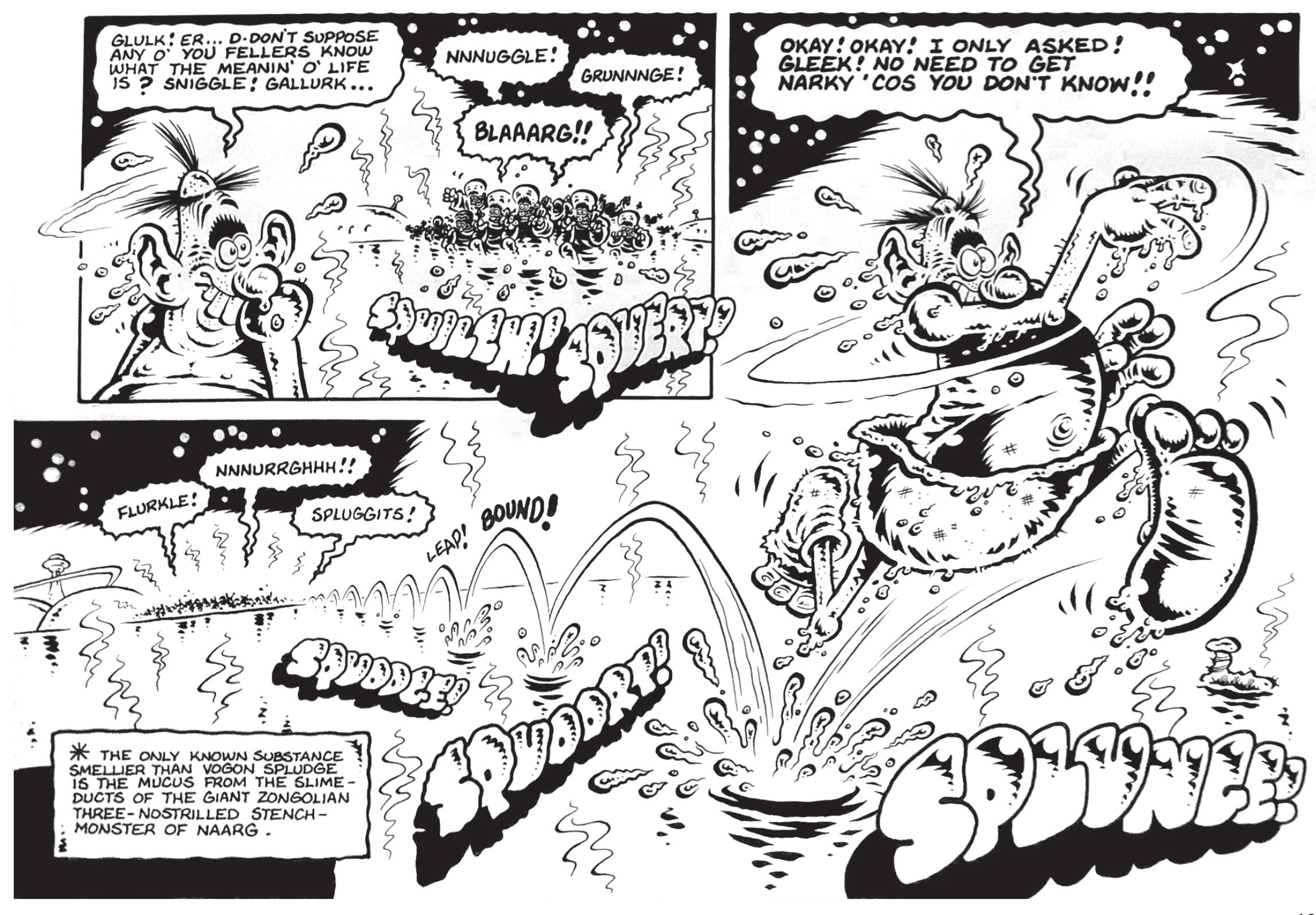 As well as celebrating the cartoonist's career, The Tom Paterson Collection is offers snapshots of British humour comics as they existed in the seventies, eighties and early nineties. The topics of parody (Kojack, Judge Dredd, He-Man and rap music) are a time capsule themselves. Those who were around at the time will have plenty to gaze at with warm nostalgia -- and newcomers to Tom Paterson's strange world are also in for a treat.

The Tom Paterson Collection is available now from all good book and comic book stores and online retailers, the Treasury of British Comics webshop in exclusive hardcover, paperback, and digital, and in digital from the 2000 AD app.