Richard Carpenter’s Robin of Sherwood is often considered the finest version of the Robin Hood legend. A lavish and hugely popular television series that ran from 1984 to 1986.

it was turned into an accompanying comic strip by the bestselling young people’s magazine Look-In; which also ran a wealth of interviews, features, and articles (alongside other comic strips) for all the most popular family and children’s commercial television series of the time.

The Robin of Sherwood strips ran for the entirety of three years that the series was broadcast, encompassing a change of actor in the role of Robin Hood; some in colour, some in black and white. Rebellion, Chinbeard Books and Spiteful Puppet have collated the entire run of these exquisitely illustrated and action-packed comic strips in this unique, limited-edition collection, with every page carefully and lovingly restored.

The artists were Mike Noble, with Arthur Ranson and Phil Gascoine, and the writer across the whole run of strips was Angus Allan. For fans of these artists and writer, this is a snapshot of their work collected together for the first time. For fans of ‘Look-In’ magazine, it also offers some of those interviews, articles, and features that adorned the pages alongside the comic strip.

It is 288 pages and is ONLY available via www.spitefulpuppet.com in a very limited print run.

A pre-order target needs to be met before this book goes to print but – exclusively – you can buy this handsome tome for a reduced price of £35 for this two-month period, available now. After that, the price will go up to £45. The publication date is the 31st of May, unless the limited print run target is met – in which case it will be sent out earlier. 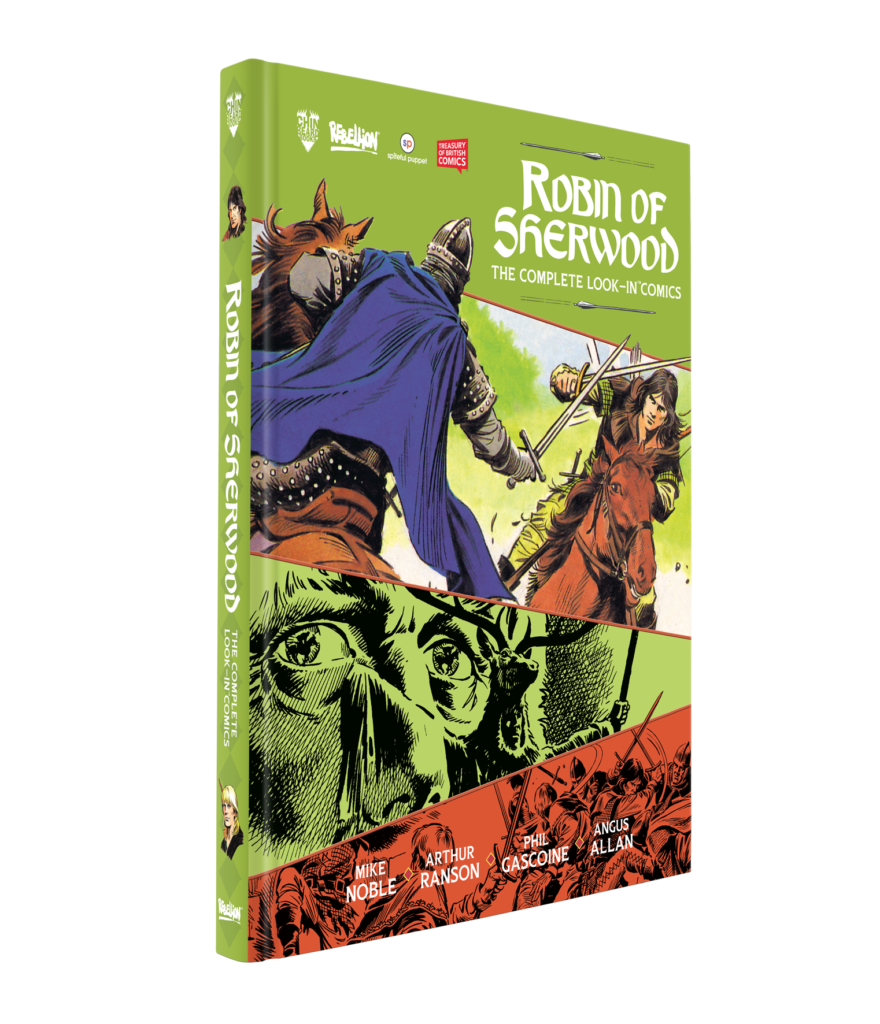 Rebellion is the custodian of the world’s biggest catalogue of English language comic book properties. Acquired from Egmont UK Ltd in 2016 and TI Media in 2018, the archive of the former IPC publishing empire encompasses more than 130 years of comic book publishing, with over 400 separate weekly and monthly titles and thousands of characters. The archive includes Comic Cuts, the 19th Century title gave the comic book medium its name, to Billy Bunter, from Tiger to Sexton Blake, from Valiant to Look-In. As the UK's leading contemporary comics and graphic novel publisher, Rebellion not only cares for this priceless cultural treasure but brings gems from a century of comic book history back to life with high quality collections through its Treasury of British Comics imprint, as well as creating new comics based on timeless characters such as Roy of the Rovers.

Spiteful Puppet Entertainment Ltd specialises in producing full cast plays and enhanced audio books. Since it was set up in 2015, Spiteful Puppet has been awarded a BBC Audio Drama Award and 3 trophies from the New York Festival, for Hood, Robin of Sherwood: The Knights of the Apolcaypse, and Passport To Oblivion. They revived Up Pompeii as a 50th anniversary audio special, as well as the classic BBC radio comedy I’m Sorry I’ll Read That Again.

Their most recent co-production featured Rhod Gilbert in his first acting role, as Nye Bevan, in Getting Better: The Fight for the NHS – a 10-part audio series for Audible, with Springboard Productions.

Chinbeard Books was established in 2015, specifically to publish books and charity anthologies that might not be found anywhere else or catered for a specific interest or nostalgic niche. After acquiring the license for Robin of Sherwood, they teamed up with Spiteful Puppet to produce original stories based on the television series, unique content, and adaptations of Spiteful Puppet’s audio range. Most recently, they have been proud to announce a collaboration based on the popular comedy series, The Goodies – with new adventures of the iconic trio of Graeme Garden, Tim Brooke-Taylor, and Bill Oddie.