'Great News Chums!’ was the dreaded slogan that once told comic book reading kids that their favourite title was about to wink out of existence - usually to be merged into another comic. In another look at the history of classic British comics, David McDonald recalls one time when the merger of a comic led to him discovering one of British comics' most beloved and prolific artists: Mike Western...

Comic mergers were a part of comic reading growing up. When a comic reached its natural end 'Great News Chums!’ would appear on its cover, heralding its closure and merger into another title, typically bringing with it its most popular stories. Mergers not only brought popular stories to the host comic but also creators! When the long running Tiger was cancelled it merged with Eagle. The stories Tiger brought with it were 'Death Wish', 'Billy's Boots', the very bizarre 'Star Riders’, and 'Golden Boy'. ‘Golden Boy’ was the story that brought Mike Western to Eagle and while he would later draw strips like 'The Avenger' and 'The Hardmen’, he soon moved on to one of it most popular and memorable series: 'Computer Warrior’.

It was his art on ‘Computer Warrior’ that made me take notice of his style - clear and fluid, with a great sense of movement. For those who are not familiar with the strip. it was a showcase story for new computer games with the main protagonist Bobby Patterson dematerialising into his home computer console to try and save the life of his friend Martin French, who was trapped within. Patterson had to play and win whatever licensed game was being featured that particular week in order to try and to free his friend. This meant Western had to draw everything from WW2 action, to sci-fi and fantasy, to Stone Age tales and whatever other new video game landed on the editors desk!

His art on ‘Computer Warrior’ was an instant hit with my younger self, and as my aptitude to recognise different artist styles grew, Western was one of the first artists I was able to identify.

Over time, I started finding his art in various IPC comics: 'The Leopard from Lime Street' in Buster is probably one of his best-known works. Eric Bradbury provided inks to Western’s pencils. The Leopard ran in Buster for the best part of a decade, crossing kitchen sink drama, school bullies and radioactive leopards in a neat three pages every week. Tom Tully's cracking scripts were brought to life with aplomb by Western and Bradbury. The pair had quite different art styles, but it merged perfectly on this series: Bradbury’s art was dark and gritty, while Western’s was clean and clear. However, their storytelling and figure work were actually quite similar, both having worked in animation at 'GB Animation' before working in comics. While he was working on ‘Leopard’, he also somehow found time to work on other titles for IPC as well.

I also found his work in Battle, the first episode of 'The Sarge' is one of the finest introductions of a character you will find, simply brilliant storytelling and world building from Western and writer Gerry Finley-Day - and all in three pages. It wasn't until many years later that I got a collection of early issues of Battle that I discovered ‘Darkie's Mob’, a 'war is hell' style story set in the Burma campaign. John Wagner’s script does not hold back, and neither does Western’s art. It's considered by many to be the highpoint of his career and one of the best stories to ever appear in Battle, as well as being the inspiration for 2000 AD's 'Bad Company'.

I, however, have two different stories that for me are the highpoint of his artwork. The first is 'Baker's Half Dozen’, which appeared in Speed, a gritty WW2 tale set in North Africa featuring the mysterious Baker and his 'half dozen', a rag-tag collection of soldiers. It reads like a cross between 'The Sarge' and ‘Darkie's Mob'. And while it is a cracking breakneck tale, it’s the artwork that really shines. Western benefited from Speed's superior printing and paper quality, and he makes full use of it. Using a subtle grey wash, his art never looked better. 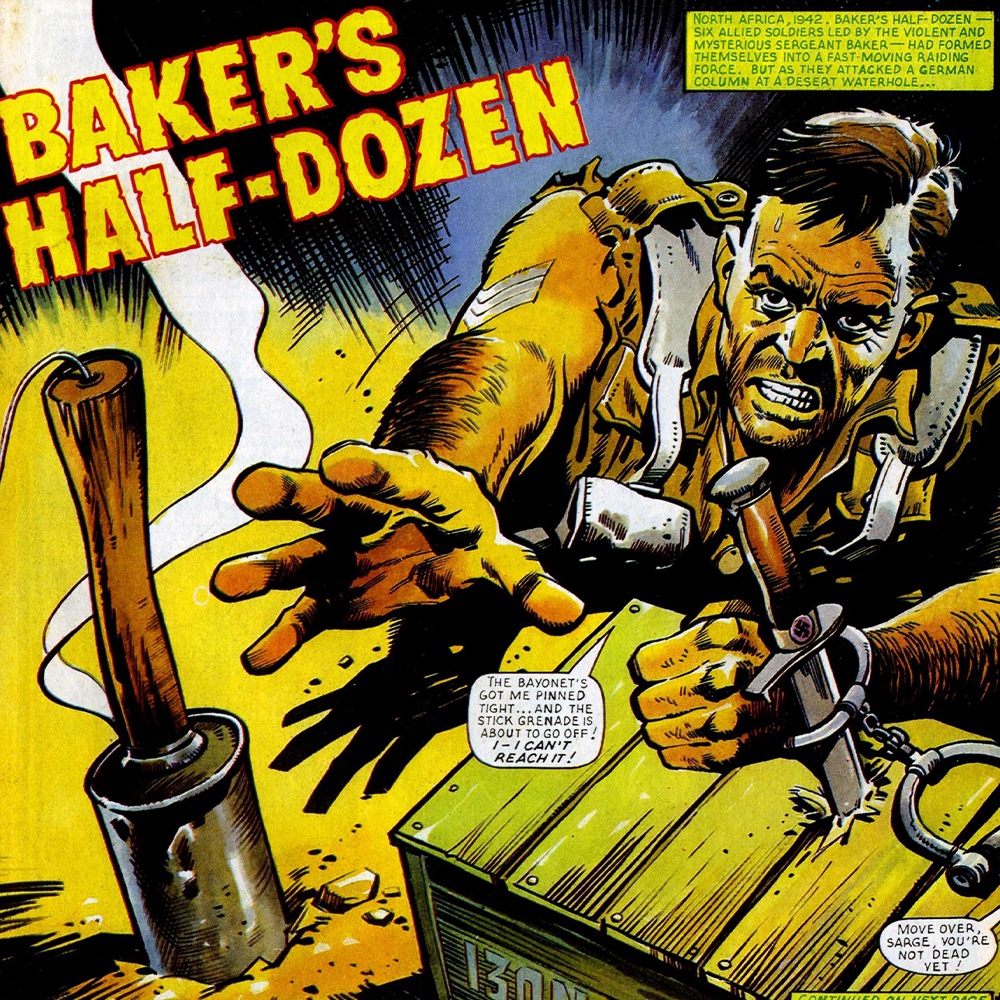 The other story, that is also a favourite of mine, is 'Wild Wonders’, a long running strip in Valiant about two young boys who were shipwrecked on Worrag island in Scotland. Growing up among the wildlife and harsh conditions of the Island they became superb athletes. When they were eventually discovered and rescued, they became wards of Mike Flynn, with whom they enter various competitions and exhibitions across the globe showcasing their amazing physical abilities. On their travels they get into various adventures, scrapes and misunderstandings, all with a humorous vein and Western’s art is perfectly suited, bringing a light, almost cartoon tone, miles away from his work on stories like ‘Darkie’s Mob’, but yet instantly recognisable.

Mike Western was one of the most prolific and versatile artists in British comics. The few stories I have looked at here only scratch the surface of his output; strips like ‘Johnny Wingco’, ‘The Duke of Dry Gulch’, ‘Topps on Two Wheels’, ‘The Hard Men’, ‘Billy’s Boots’, ‘HMS Nightshade’ and many, many more - and not forgetting the hundreds of covers he produced for Valiant - cemented his status as one of the industry’s finest artists.

His work not only appeared in comics; he also drew the ‘Roy of the Rovers’ strip in The Daily Star newspaper in the nineties, and as he eased into retirement he continued to work for the theatre magazine Theatre Mask, while also concentrating on his own paintings. He passed away in 2008, aged 83.

Western’s ‘Leopard from Lime Street’ stories are available in two handsome collections from The Treasury of British Comics, and the first volume of his work on 'The Sarge' is out now.

He was interviewed by Steve Holland in the 'Mike Western Story’ – a great overview of his work. An interview also appeared in Eagle Flies Again fanzine, and his son Peter, (also an artist and a Bafta Award-winning one at that!) presented pages of Mike's work diary on the Facebook group 'Battle Fans', giving a fascinating look into Westerns working life. 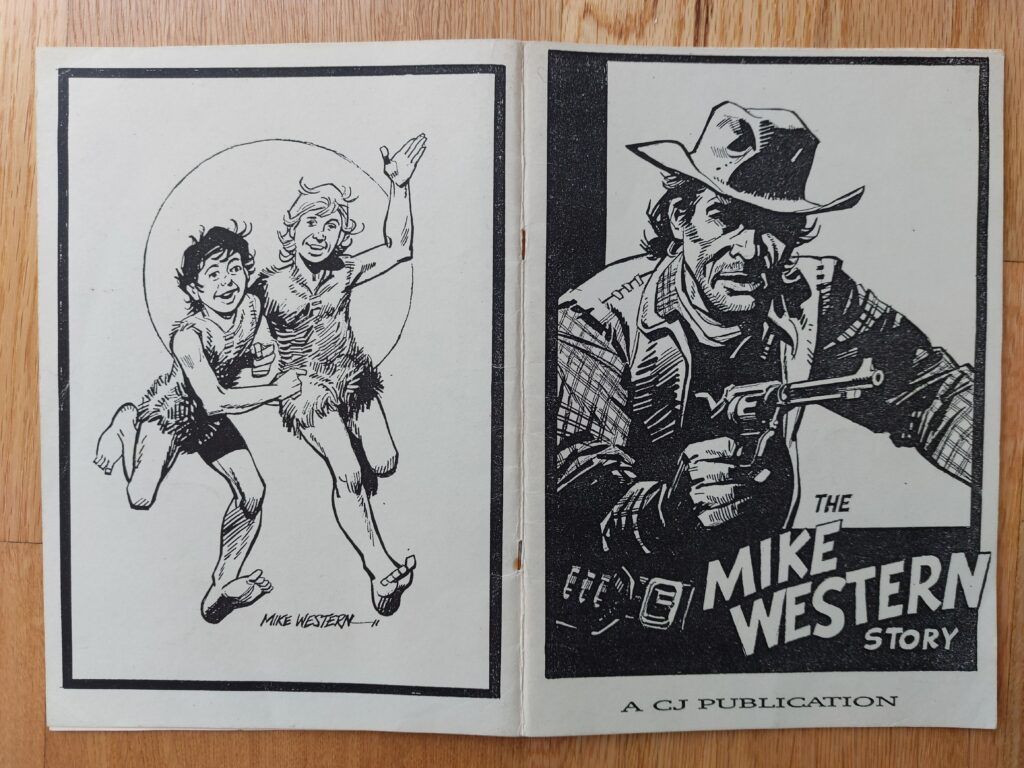